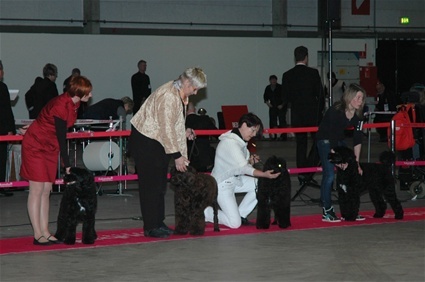 09.12.2010 We today received the second gentest result, of the three we are waiting for, on Cirkeline. We are happy to annouce that she is IC: Normal. Jeepiii (-:  01.12.2010 We supported the homeless dogs on Fyn with warm blankets, collars, rugs and backpacks for the dogs. They didn't choose to live on the street, and it is freezing out there these days.Merry Christmas.29.11.2010 We got the first result of Cirkelines three remaining gentests to come. Cirkeline is GM-1: Normal - Good news(-:Cirkeline was # 1 PWD of the year in Denmark - Canis from our litter in 2009 was # 5 PWD of the year - Unik was # 2 PWD Veteran of the year - well done doggies(-: At the DKK International show in Herning, 07.11.2010 we again participated with 4 dogs, Nelle, Canis, Cirkeline and Mac. Nelle got Excellent and was 2nd Best Open Class Female. Canis received a Sufficient. Mac was 2nd Best Male with Excellent and Cirkeline again became Best Female and Best Opposite Sex achieving the titles Danish Winner 2010 and PWD of the Year 2010, DKK Winner 2010 (-: This was her last show and we now are trying to find a suitable male for her, so we hopefully can have wondefull small princess and princesses in spring 2011 (-:  At the DKK International show in Herning, 06.11.2010 we participated with 4 dogs, Coco, Canis, Cirkeline and Mac. Coco was giving a Very Good. Canis a Cannot Be Judged. Mac was 3rd Best Male with Excellent and Cirkeline became Best Female and Best Opposite Sex (-:  At the DKK International show in Ballerup, 18.09.2010 Coco was 2nd Best Female in Breed and took her 3rd CAC, which could have made her Danish Champion if she was old enough. Cirkeline became Best Female and Best Opposite Sex and Copenhagen Winner 2010 (-:  We have been on vecation in Norway and Coco now is the first Danish PWD to have climed the Preching Chair, we were all very impressed how she super elegant managed to get up and down, carring her own water and food (-:We participated at a show up there, and Coco was priced with a very good, but a perfect and powerfull behavour. The 29th of July we received Nelles AD and HD results, Nelle is not OCD x-rayed. Nelle AD: 0 and Nelle HD: A = Free from dysplastic.The 24th of July we received the HD results on Coco and Canis. Canis HD: C (C/B) and Coco HD: A = Free from dysplastic.At the DKK International show in Vejen, 14.08.2010, Coco was 2nd Best Female in Breed and took her 2nd CAC, Canis took his first CAC, Best Male and BOS, Cirkeline became Best Female and Best Of Breed (-:  The 23rd of July we had the AD and OCD results on Coco and Canis. Canis AD: 0 and Coco AD: 0 (-: Canis OCD: Unaffected and Coco OCD: Unaffected (-: It just doesn't become any better(-: The 19th of July we had Coco, Canis and Nelle x-rayed. At the World Show in Herning 24th of June 2010 Mac took 2nd Best Champion Male, Canis took 5th Best Junior Male, Cirkeline took 3rd Best Champion Female, Nelle took a Very Good in a junior class of 19 females, Coco, who were in the same class took 3rd Best Junior Female - way to go young lady(-:We were placed in all the classes we participated in and that must place us among the elite in our breed. 5th June 2010 Cirkeline finished her Dutch championship, she is the first and only danish PWD to achieve that title - and wow we forgot to anouced that Cirkeline also became an International Champion the 1st of May 2010 - Don't know how DKK will make room for all her titles in her puppies pedigree, as we will now spend time having all of them registered(-:23.05.10 Cirkeline becomes a Swedish and Nordic Champion in Hässleholm, Sweden. 21.05.10 Cirkeline pass Bronze level in Canine Good Citizen with handler Helle Dyrlund - Congratulation to both of you(-: The 15th and 16th of May Coco is the first and only Danish PWD who has been mental tested, and she did it with glamor, just ask her "mother" (-: The fact that Coco is also Danish bred, do not make the honour less (-: Coco was the youngest participant in the mental test. just one year and three weeks. The whole thing took place at The Portuguese Waterdog Camp in Hammerø the 15th and 16th of June 2010, where about 30 PWD's and their families had gathered for an active weekend with their water dogs. There were speaches about training with water, agility, weight pull, rally, obiedience, and also given tips about how to activate the dog while walking and 8 lucky participants also had their dog mental described on the 16th of May - including Coco (-: Cococ also the youngest participant at the annual club championship in agility arranged by The Breed Club of Portuguese Waterdogs of Sweden, and the owner was so proud, we had a fantastic weekend - thanks to everyone who helped us make it possible (-:Canis Best Male in Stepping the 13th May 2010 (-: Later on the day Anne-Louise and Canis ended 4th Best Juniorhandler  - way to go, you're great together (-:The 1st of May 2010 we were at the DKK International show in Hillerød (-: Here Coco became Best Junior female closely followed by Caya, who ofcourse became 2nd Best Junior female - well done girls (-: Cirkeline became Best Champion female and later Best og Opposite Sex. Coco finished beautifully showed by Sessa and became 3rd Best Bitch (-:The 30th of April 2010 Coco, Caya, Alice and I were participating in a handlercourse by an American handler, it was very educational, and we have received lots of new tricks for free stand and also just in general getting better in the show ring (-:Happy Birthday to Carlo, Coco, Clupea, Bowie, Nelle, Caya, Canis and Chico (-: 1 year on the 25th April 2010, how time flies (-:Not only birds have been visiting Coco, also her sisters and brothers have been visiting us, and we are so happy to see that their all doing well in their families.

Best Breeding Class, 2nd in Fredericia 2010 - big thanks to everyone who made it possible (-:

The 30th of January 2010 we were going to an International Dogshow in Fredericia. There were given out warnings about snowstorm, but we took it easy as we had never been snowed in, so off we went at 06:30 am down our driveway, which is 250 meters long. We only maneged 100 meters along the road and then we were stuck. And it did not became any better, when we found out that one of our neighbors blocked the road because he too was stuck 100 feet further along the road, but give up - not a possibility, we are real genuine dog people (-: So out with our shovels and get started ( -: 1 neighbor came to help, 2 more neighbors turned up, and then a 4th neighbour also came to help. (Saturday morning minus 10 degrees at 06:30 - we live in a good place (-:) At one point we actually gave up, but was encouraged to try more of Jens Ole and Alice, who would try to move the judging of the breed to later in the day. S o we shoveled and shoveled. Pushed our car back into our own driveway, then pushed the neighbours' car home and then pushed our car into the road again - off we went, and now we almost came flying to Fredericia (-: And thank god we came, because it was a pleasure to see how beautiful and well trained Caya and Canis showed themselves in the breed judgements (-: Coco won her first certificate and was second best bitch in breed. Unique became Best Veteran and third best bitch in the breed. Melua got a good review, but do still need more practice (-: Cirkeline was Best of Breed and later in the day second best in the Group - Fantastic (-: We tried for the first time to join with a Raise of Breed Class and we became second best Raise of Breed Class - We are so proud and very thankful that it was made possible, it requires a great effort from a lot of great people (-: Thanks We also tried for the very first time with a breeder class, but unfortunately we did not get any placement, but we tried it and had the experience (-: Thanks

The 24th of January 2010 there were an unofficial show in Årslev. The only person there to represent our wonderful breed was Alice, who came all the way from north of zealand(-: She brought Caya, Unistars Call Off The Search, and her other pwd Dee-Dee with her. Caya, once again, did a lovely job in the ring, and at the last day of being a puppy she ended up Best Puppy of Breed. Dee-Dee got a good critic(-: Later on the day we went to see Alice and co at the show ground, but also my son Andrew were competing in the Child and Dog competition, for which purpose we had borrowed Caya (-: They were placed as number 5/6 Best Child and Dog. We all thought they made a lovely couple, so fun to see how Caya senced that it was a child at the other endnof the lead. We hope to get pictures of the happening (-: